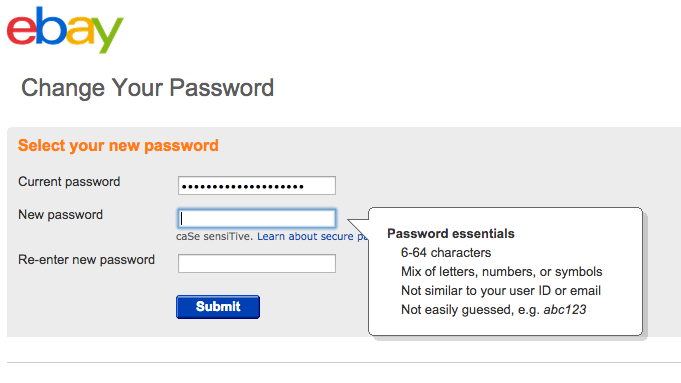 Firstly, I like EBay and have been using it for over 10 years. When I found out via news forums about the big security issue I realised I had to do two things.

For some reasons both of these rather simple things caused my problems due to “Security”, so lets look at each one and work out why it is a problem.

With point 1, there’s nothing I could do other than contact support which I did (only tonight after being bored) and spawned this, with 2 I just coped and validated today to find out they have now got a new password policy and it seems to have been set by someone sensible and is now as follows:

So this does mean my rant about two things now becomes a rant about one thing, but it is the one that is annoying me the most so here goes.

There’s two types of security, theatre and actual. Actual security results in the system being secure, i.e. implementing two factor authentication. Theatre on the other hand is things people do to make you think it’s secure, i.e. insisting that your username and email address are different. Why is that Theatre? well simply put, my userId can be easily found out so is considered public domain knowledge, secondly knowing my userId should not make logging into my account any easier, thirdly, it not being the same as my email address can only stop people guessing my email addresses or other details.

So Ebay have implemented (back in 2004 apparently) that your UserId can not be present in your email address, so Let’s say my Ebay userId is soimafreak (it is) I can not use any of my normal personal email addresses as with most people I have an internet handle and I stick to it. Sure I could use a different username on every site, that does stop people guessing my username. But, again, knowing my username should not make it easier to hack my account… unless you have poor security to start with…Ebay…

Let us go on a story telling journey now and hypothesise how bad Ebay’s security really is at its core. To do this you have to understand that Ebay was an original .com bubble company back in the good ol’ days where good security consisted of two things, one md5sum a users password and make sure your DB is not accessible on the internet and make the access restricted by username and password.

So as discussed before md5 has some flaws, but I imagine up until recently Ebay used an approach like this or maybe worse for storing passwords. Why is this bad? Well you can be subject simply to Rainbow attacks which are very common place. Now lets say it gets to 2004 and you hear about people doing that, what simple security precaution could you take with out re-hashing everyones password, which would require everyone changing their passwords… well if you insist that the UserId is not the same as or contained in the email address that means for those specific users it would be slightly harder to work out what their username was. Was it a gmail.com? hotmail.com? aol.com address with their userId on it.

Why is this so pointless?

I’m not saying it was a bad thing to do back then, I’m saying it’s a bad thing to still be doing now because things have moved on. I take my passwords quite seriously and as time goes on I move more and more websites into keepassx where I have no idea what the password is. It would not be hard to guess or work out most peoples usernames for websites, I’ll give you a clue, it’s normally their email address or some other UID like your Ebay userID so right aay I can get everyones userId but I shouldn’t be able to break their password. The problem comes if I crack your password on an insecure site, as you may recall from this earlier I don’t have to know your password I just have to know a string that generates the same password which is why salts are important. So going back to Ebay, let’s say I pick a random ebay user my-pet-frog I found this by searching for “wibble” on ebay and I found this and what’s on this page…

So I now have their email address or at least a couple more leads to try, so again, what’s the point of the original security put in place in 2004 when the real solution is to educate users and to implement actual security and not security theatre.

So I ask you EBay to implement actual security and not theatre and more importantly to let me change my sodding email address.

Now as for my-pet-frog I feel bad, they hopefully will read this and see that they should not share those details on Ebay because of ‘security concerns’, but why shouldn’t they, should all EBay users insist that Ebay just implements actual security so the users can use the system in a better way with out having to make their email addresses public because of security theatre and a lack of education from Ebay to its users. Anyway as I was bad and used my-pet-frog as an example I hope to go some way to compensate them.

Please check out their Ebay shop or their Amazon store front or better yet their actual website Hotscamp.com there really are some awesome T-shirts on here and one of my favourites is this Back to the future one or this Portal one

I do have a massive transcript of the conversation I had with Ebay customer support about this issue, but largely irrelevant other than they are tied by the same system and they were helpful. Ebay did graciously allow me to write a letter of complaint to their complaints department but that was too old Fashioned for me so they get a Blog rant. However if you would like to pritn this blog and send it to their complaints department here’s the details: