It’s been a while since I’ve thrown myself into an idea and tried to come out the other side, so I’ve spent the last couple of days just thinking about what’s missing. It doesn’t take much to have an idea; but making sure it’s a good idea, making sure it is unique in it’s offering and making sur eit’s better than anything else is not easy.

At work we are working on an idea, a concept of some sort of DevOps tool that takes a lot of what we do already and simplifies it and merges multiple tools into one place, the driving goal is easy of use, take an entire system, data centre what ever you want and within minuets you’ll have the whole thing monitored, feeding metrics back for reporting, performing real time analysis and trending. It’s still very much prototype phase but it’s a very exciting project that wraps up several elements that we as a team are passionate about, ease of use, efficiency, performance, monitoring, measurements and of course, cool technology; but with that said I still have this urge to do something else, I’m not really sure why, I’m busy enough as it is but I feel like the world is missing something that is more than just an amalgamation of parts, or a re-skin of an existing thing, I feel like it’s missing something, the question is as always what?

There’s a saying “All the good ideas are gone” probably true, but that doesn’t stop people striving for new things, look at Glass I’m not convinced it has a long term future in that styling, but wearable tech certainly does, look at this wrist computer from the tv show chuck, just what I’ve always wanted. 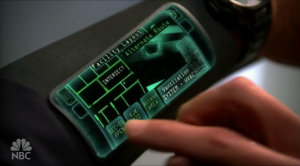 a lot of the best ideas today are based on things that have come before and re-envisioned, walkman -> ipod; iPaq -> iPad; alta vista -> google

This is the bit I’m struggling with, and it’s the hardest bit of the whole thing, for me it’s not good enough to take an idea and make it better, if someone gives you a product and says make it better it wouldn’t take long for a few ideas to bubble up. I’m thinking more along the lines of taking some wacky out there thinking and making it a reality in a way that works and works well.

I think over the next few weeks I’m just going to just write some things down and see which ones stand out, which ones seem stupid/crazy to do and then probably come up with one that works.

I’m not really sure what that is at all, I could take something like sentinel and munge that into something else, but it just doesn’t feel like the right idea. I had an idea a long time ago, probably 3 years ago, which I talked my self out of because it would take me forever to make and I didn’t have the skills, but things have changed, it isn’t even ground breaking it’s just another internet site.

Either way I’ll keep on plodding along for now and see if I can come up with something but until then much more scribbling on paper and throwing things at a wall.